The Power of Saying “No” 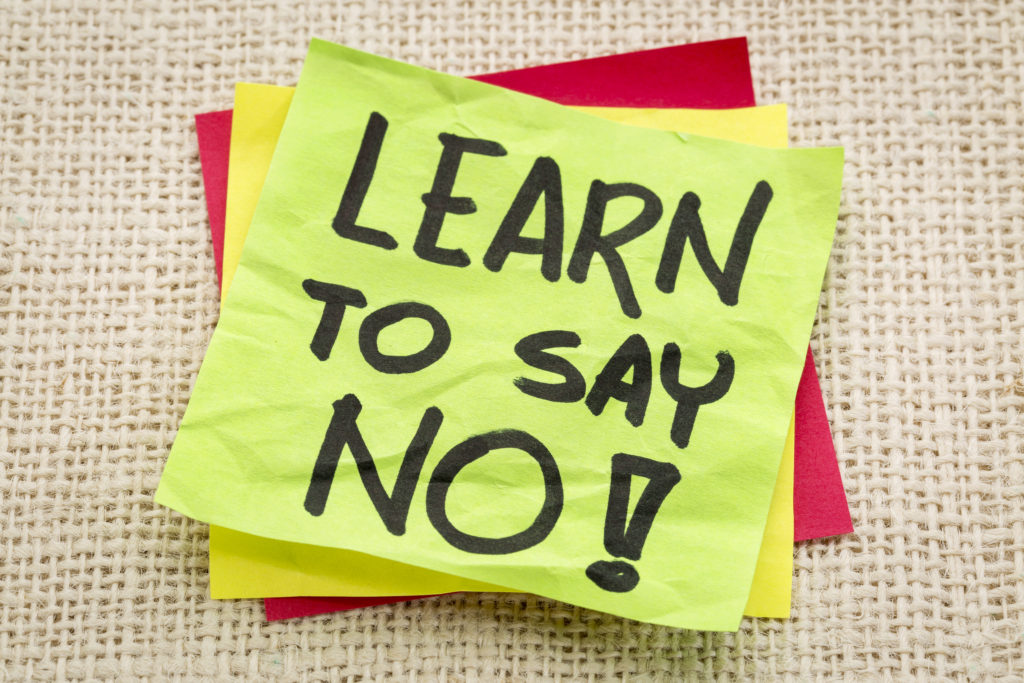 By Brett King, CBO, City of Carrollton, and BOAT Board of Directors

This message—adapted from a blog by Strategic Facilitator, Tony Jeary—spoke to me, as it’s an area in which I need to improve. Maybe there’s someone else out there who feels the same way and can also benefit.

Are you saying “no” as often as you should? Saying “no” is one of the most overlooked components of success. It’s a challenge we all face year-round, but the end of the year definitely exposes our skill (or weakness) in this area more than any other time. Think about everything that was your plate at the end of the year:

And that’s just what was happening in December. That is just scratching the surface when you look at an entire year, right?

Time is always our most finite, even sacred, resource. How we spend it influences the results we achieve in every single part of our lives. So it’s crucial to be extremely deliberate in what you say “yes” and what you say “no” to. Some of the most productive and successful people who ever lived got there by saying “no” more often than they said “yes.” They were clear on what they wanted, what they offered, and how to make it all happen. They knew what was critically important. And then they said “no” more often than most people to the many opportunities, requests, and circumstances that didn’t align with what was most important.

How well do you say “no?” Think about your life right now. Look at your calendar. Think about this week, next week, even next month, and throughout the new year. How well do the items on your calendar line up with the important tasks you’ve identified for yourself? Even the best leaders need a tune-up in the “no” department on a regular basis. So that’s what I’m inviting you to do right now – save your time, your most precious and finite asset, for what matters most.

These reminders can have an immediate impact on your life. Take time, reflect, and pinpoint one or two specific next steps for you to get the results you want faster:

“It is only by saying ‘no’ that you can concentrate on the things that are really important.”
Steve Jobs

“You have to decide what your highest priorities are, and have the courage to say ‘no’ to other things.” Steven R. Covey

#2: There are three main reasons people don’t say “no” when they should.

People pleasers are rarely highly effective people. Besides, saying “no” does not have to be a negative. Saying it in the right way can be very well received.

#3: Saying “no” gives you leverage to succeed faster.

If you don’t say “no” to low-leverage, low-priority activities, your energy will be completely wasted on things that don’t really matter, and stolen away from those things that do.

#4: Saying “no” saves time and gets to the results everyone wants.

Requests for things like lunches, phone calls, and meetings are often unnecessary. Say “no” to the original request when you can fast forward to the actual result everyone wants. If it’s an issue that can be quickly discussed and resolved, why schedule a meeting for it later on? Simply resolve it and send the interested parties a quick and informative email that says, “Here is the issue and how it has already been solved.”

Your time is the most valuable resource you have, and it can never be replaced. Stay focused on what’s important, and you won’t have to wonder where your time went.